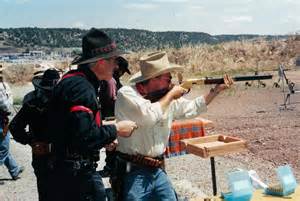 Gene Pearcey aka Evil Roy has a tried and true approach to shooting and shooting sports. A belief in the “Keep it Simple” line of thought has helped him break down and teach the mechanics of competition shooting allowing the most novice of shooters to become confident in firearm fundamentals. Whether you want to be the next World Champion or just secure in the knowledge of how to correctly handle a firearm, Evil Roy Shooting School has you covered!

In addition to being one of the few SASS shooters to win both an Overall World and National Championship In Cowboy Action Shooting, he is the only person to also win both Overall National and World Championship in Wild Bunch.  Evil Roy has instructed many, many shooters who have won World, National, Regional, and State Championships.  Wife Wicked Felina, granddaughter Holy Terror, and grandson Skin Dawg are all successful shooters who have used the proven techniques taught by Evil Roy. Both classes and training DVDs are beneficial to becoming a great shooter.

Evil Roy Shooting School is now located just outside of Dublin, Texas. At this time all lessons at the Dublin location are private. Lessons are geared around your needs and are scheduled in 4 hour blocks and are normally 1 to 2 days depending on your preference and requirements. Typically we will schedule you or you and up to 3 additional people in your party. The fee is $250.00 for the 1st person and an additional $100.00 per person for up to 3 additional people per day for a total of 4 people per class. The skill level can be varied, Evil Roy will be able to help all of you advance at your own level.

If your club or organization is interested in arranging a large group lesson, please contact us about scheduling.