You are here: Home1 / About

A Personal Note from Gene Pearcey 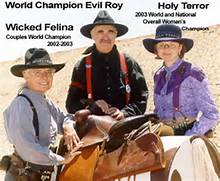 I lived in Durango, CO for over 30 years and moved to Texas in 2014.  In mid-1992 I had the opportunity to watch an annual SASS match in Durango.  I did not even know what SASS was.  I decided in 1993 at the age of 50 that my days doing martial arts and racing motorcycles was over for good and that I should be able to shoot for Cowboy Action for years before I got too old.

I showed up at a local Durango match in mid-1993 with a .44 mag Ruger Super Blackhawk, a double barreled hammered shotgun, and a Winchester 1894 Trapper in .44 mag.  I had one pistol, a snap holster and not the best shotgun.  Over the years I got more appropriate firearms and leather and started traveling to big matches.  I really enjoyed the shooting, worked very hard to get better, and had the opportunity to shoot against great shooters which made me a good competitor.  My first End of Trail was in 1994.  It was my 4th big match and I placed 5th overall.

In the following years I won overall in National and World Championships in both Cowboy Action and Wild Bunch matches.  My wife Karen, a.k.a. Wicked Felina, started shooting in 1994 and has won many State and Regional championships.  Without her support I would not have been able to compete successfully.  We have had over 20 years of fun, travel, and great experiences shooting in the U.S. and other countries.  My granddaughter Randi Rogers, a.k.a. Holy Terror, started shooting with us at age 11 and has gone on to become the most successful female shooter in SASS history as well as winning many National and World titles in the world of combat shooting in several sports such as IDPA and IPSC.  At age 10 my grandson Reece Skinner, a.k.a. Skin Dawg, started and is already a top shooter at 16 years old. He is shooting up among the top shooters in Cowboy Action Shooting, CAS.  Wicked Felina, Holy Terror and I were jointly awarded the Spirit of the Game award and I was inducted into the SASS Hall of Fame a few years ago.  Pretty heady stuff for an old motorcycle racer.

I have accumulated many years of experience and along the way and I have designed and marketed firearms, leather and other products incorporating improvements to make Cowboy Action Shooting safer, faster and more fun.  We market the products available for CAS competition.

The best part for me and my family competing in Single Action Shooting Society events is all the really great people we have met along the way.  I love the competition but it is the people who make it great.

Karen and I now live in rural North Central Texas near Dublin.  We continue to do classes and sell Evil Roy products and gear over the internet. We have just released a new line of holsters and associated gear produced by Ted Blocker Holsters which offers an improvement over our previous leather gear and we are always working on new products to make us all better shooters.